A couple things happened last week that made me realize how close of a family we are here at UWC and just how much I love it.

Contacts, Elephant Poop, and The Wizard of Oz
Once upon a time, in a land far, far, far, far, far, far, far, far, far, far, far away (so in New Mexico) there was this amazing school with lots of cool kids. One day, two of the students, Z and J, decided to play a joke and steal S's contacts so that he would have to wear his glasses the next day. It was all fun and games until S recruited A1 and A2 to exact revenge. The three boys stole whole bags and boxes of Z and J's things as well as Z's $10,000 cello. The girls got it back, but knew they would have to retaliate. But how to do so without making the whole thing escalate even more? Hmmm.... what could be better than physically messing with the boys...? Yup, that's right- psychological warfare (MWAHAHAHAHA). So the girls baked the boys perfectly good chocolate chip cookies and gave A1 and S the cookies. But the boys, having eaten the cookies and tricked by Z and J's mad acting skills, threatened that if the cookies made them sick they would come poop on the girls' floors. But the girls weren't worried. There was nothing in the cookies, so there should have been no problem, right?
Wrong.
The boys, and you have to give them a little credit, were pretty creative. They sent the girls a little... "present" in the mail.
One Saturday morning, about a week later, J went to the post office and was surprised to receive a package. She was really excited because hey, getting mail is fun, but when she opened the package she was really confused. It contained a plastic baggy full of some unknown brown and green stuff and was labeled "Elephant Poop- www.poopsenders.com".
(I'm not even kidding. Look it up, you can send cow, elephant, and gorilla poop in different quantities. Yeah, I know, who in the world thinks of this kind of stuff?!)
So anyways, J received this completely anonymous gift. Her roommate T said she knew who had sent it and wouldn't tell but confirmed it was someone on campus. Z received an identical package two days later (which we've hidden for emergency revenge purposes, so watch your backs.... :)). Now, unfortunately, S and A1 are pretty good actors too and swore they hadn't sent the poop.
Conveniently, about another week later, J had to go home for a bit, but very few people on campus actually knew why. So Z and J came up with a brilliant plan- spread the story that J was leaving because she was feeling bullied. The culprits would feel guilty and come confess. (I know, we're devious and brilliant, what can I say?) Now, Z and J fully expected the pranksters to come forward sometime within the following week. But, thanks to the wonderful gossiping skills of 200 teenagers, it took only two hours.
S and A approached the girls as they were walking up to the castle. They were distraught and beseeched J not to leave because of their silly joke. They swore they meant no harm, that they'd write letters to J's parents, and begged she stay. Have I mentioned Z and J are brilliant actresses? Mhmm.
But after about an hour they felt really guilty so they explained it all and the boys took it well and agreed the girls had won this one.
Have I confused you enough yet? I said this was an example of the UWC family, right? Hold on, we're getting there.
While J was home, she received a message from one of the boys saying they'd gotten her something else. She was terrified. (well not really, but come on, that sounds a little more dramatic.) Had they gotten 100 bugs to set free in her room? More poop? Stink bombs?
They approached J in the caf one day when she was finally back and said "There's a present waiting for you in your room, and its even better that your dorm's water system is broken, hahaha". WHAT. J ran to her room. And do you know what she found? 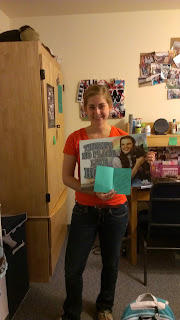 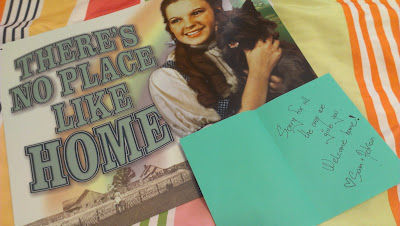 Yup. So it turned out that the evil boys actually did have hearts and were really sweet and creative :)

Thanks S and A- yall are awesome and its so good to be "home"!

Family Looks Out for Each Other
This one's a little different and can't really be told as a fairytale story.
Last week a bunch of us students took the usual Wednesday bus to Wal-Mart to stock up on necessities (mac n cheese... nail polish... ya know, things we really just can't live without). The trip was pretty normal and everything was going well until we got to the check out and went outside. A man, dressed all in dark clothing covered in a trench coat kept walking around. He didn't have any items from the store, walked in and out of the checkout aisles a few times and, when we were all standing around outside waiting for the bus to come back, kept walking up to the group. Now, maybe there wasn't really any need for alarm, but you would not believe how well the group responded. The bigger boys fanned out nonchalantly, making sure no one was by themselves (One of the boys, L, who was near me was one of the first to notice and said dutifully, almost resignedly, "I'll go stand by B" (a girl who was sitting by herself near where the man was)), everyone tightened up the cluster, watching the man's every move. I don't think he was completely well, as he mentioned some rather disturbing information about a younger brother, and I can tell you a lot of us were a little spooked, but just to see all of the students ready to protect each other was incredible. We really are a family and family looks out for each other. Love you guys :)
Posted by Unknown at 10:20 PM