It's been a while, I know, sorry. The spring semester is always busy, and UWC is definitely no exception. A couple major things have occurred over the past couple of weeks, so I guess I'll just go through those:

ABQ USA Applicant UWC Interviews-
Each year the US National Selection Committee organizes about 12 interview sites around the country, interviewing nearly 600 candidates, in order to choose 50 individuals to distribute to the UWCs around the world. The biggest interview site is Albuquerque and, because its close(ish) to the school, about 10 current students get to go help facilitate the interviews each year. And I got to go! Whoo!
It was actually really fun! When I attended my interview last year I had a blast. Yes, it was really stressful and I was nervous, but meeting brilliant people and playing games all day isn't such a bad deal. This time was even better (because as T (our admissions director) reminded us, we're already in). We answered questions for the interviewees and their parents and played games with the students. In all honesty, it was a really strong applicant pool, and I wouldn't want to be in the committee's shoes.
The interviews were also kind of a jarring wake-up call. Some of those students are actually going to be accepted and come to our school, meaning I'll be a second year and my second year's won't be here anymore. UWC does not exist for me or my class without our second years. They've just always been here, and the fact that I'll probably never see some of these amazing people ever again is scary. Not to mention it's been nearly a year since my whole world changed when I decided to come to UWC. Boy, does time fly, or what?
I wish the best of luck to the applicants, but am also dreading that day in May when I have to say good-bye to so many of my friends.

Holi-
Holi is the Indian festival of color. Though we were unable to celebrate the festival on time, we did celebrate with a bang. After some of the students said the appropriate prayer (it's a Hindu festival), we started on the fun part- throwing colors at each other. Picture this- 75 teenagers running around a soccer ball throwing paint and water all over each other. Messy? Yes. Fun? Absolutely! 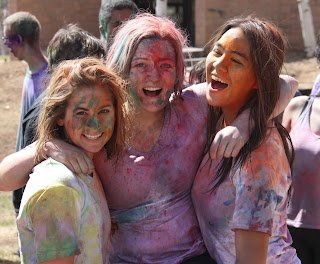 April Fools-
I was a little worried for April Fool's Day. I've already described how crazy pranks can be on a normal day, so a day dedicated to pranking definitely seemed problematic. But it wasn't nearly as crazy as I imagined. In fact, the only pranking that took place, that I know of, was directed at the teachers.
My first code Monday morning was Social Anthropology. Each member of the class spoke their own language to answer our teacher's questions. At first he was just really confused (I'm pretty sure he thought he just wasn't understanding S's mumbling) but then caught on and thought it was pretty funny.
In my last code, French, we tried to confuse our teacher by nonchalantly switching seats every 5 minutes. Unfortunately she caught on extremely quickly and it didn't end up as much of a prank. Oh well.

So lots of activity here on campus. As we get into the last two months of the year (.... let's not mention the G word...) the calendar is absolutely jam- packed, so be patient with the long breaks between updates.
Hope y'all are enjoying the beginning of the spring season :)