As many of you know, prior to UWC, I was not in any sense an "outdoorsy" person. Like, at all. I wouldn't say that I have now become an avid camper or hiker, but I have actually been camping and hiking and have enjoyed it :)
This past weekend, I had a new wilderness experience- that of winter wilderness. This is the trip most commonly referred to as the "Yurt Trip", because those who dare to embark upon the journey stay in a Yurt up in Taos. It's also a cross country ski and snowshoe trip. I signed up for the trip and was one of the lucky 30 students who got to go. I was super duper excited- ready to experience camping in the winter and XC skiing and snowshoeing for the very first time.
We left school early last Friday and made the drive up to Taos in our white and blue UWC bus. The leaders said the hike to the yurt was about 1.75 miles. So I figured, hey, get to Taos around 3:30, hike an hour or two, set up camp, sleep. Awesome.
No. 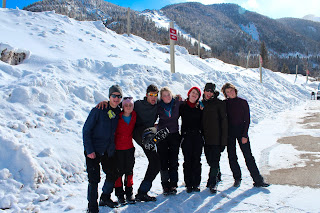 What I didn't realize is that the hike up to the yurt involves hiking up a mountain. Like a mountain. Covered in several feet of powdery snow. With more snow falling by the hour. Breaking trail. Carrying our packs and skis. In the encroaching and finally arriving darkness.
At first, the whole thing was really fun. The mountains are absolutely beautiful, especially covered in snow; quiet and serene. And my team was awesome- chatting and optimistic as we kicked off the trip. We kept catching up to the leading team and couldn't figure out why they were moving so slowly. We finally realized they were breaking trail (which means quite literally packing down snow to make a path for us to follow, which is a lot of work- kudos to those who did this!). We also realized that, with no clear path, we weren't really sure where we were going. In the dark. Yeah. We had to stop for a bit and let the leaders pan out and scout.
We finally chose the right trail and, after a very long, very tiring trek, reached the yurt. Guess how long the whole thing took? FIVE HOURS. For 1.75 miles. I couldn't believe it; but when we did finally reach the yurt and take our packs off and warm up, there was definitely a sense of accomplishment attached to the experience. 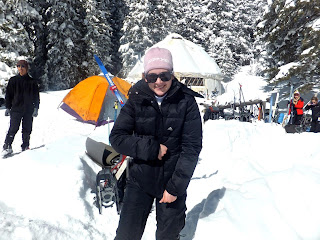 Now, most of you are wondering what the heck a yurt is anyways. It's this kind of structure with a floor, wooden frame, and very thick canvas-y covering. The one we stayed in wasn't very big, but it did have a gas stove to cook on and fire-stove to stay warm. We packed all thirty kids inside the first night to sleep (yes, very cramped, but warm). The second night some of the group built a snow cave and others set up tents.
We spent Saturday cross-country skiing, snowshoeing, exploring, sleeping, playing games, and just hanging out. It really is incredible up there. And it was great to try out some new activities and just have fun.
Sunday, we packed up, cleaned up, and hiked back down. Thankfully, it was much, much easier to hike downhill, in daylight, with an existing path, and we made the trip in just over an hour.
After another 3-hour drive, we finally returned to school, unpacked, de-issued gear, and got to shower and sleep. 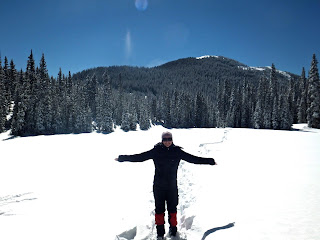 To all of our dismay, it snowed like crazy Sunday night. I think we're all a bit sick of snow now, and A and I have decided never to wish for snow again, or to complain about climbing the stairs to the castle.
The whole thing was definitely a cool experience, and one of those things that I would probably have never done outside of UWC. I learned a lot about winter wilderness expeditions (like the incredible amount of gear you need, layering, some basic first-aid techniques) and got to know several people a lot better. Although a bit difficult at first, the trip was awesome and I recommend, to everyone, doing something like this at least once in your life.
Posted by Unknown at 9:56 PM