A Little Bit of Magic


A lot of the time when I tell people I go to a boarding school and show them a picture of our castle, they tell me it looks like Hogwarts. And I would agree (though not as much as the UWC in Wales). The Harry Potter series is so popular that most people around the world have read the books or seen the movies (or both) and immediately connect the series and its symbols with our very similar story. And though we obviously differ in many respects- we’re not in the UK, our castle is brown brick instead of gray stone, and, most importantly, we don’t study magic (although my math teacher would argue that his class is "mathemagical") - last night the campus definitely felt like a scene from a movie.
This year several students initiated a Harry Potter Club and, as their big event for the year, they brought in the founder of the Harry Potter Alliance and put on a Yule Ball. The Harry Potter Alliance is an organization that uses symbols and ideas from the series to promote social activism. The founder’s name is Andrew Slack. He has been on campus this weekend and put on several workshops (which I’ve unfortunately had to miss due to classes and field trips :/). I do know, however, that many students have enjoyed his discussions and that his ideas parallel a lot of other discussions we’ve had on campus about social activism and ways to get involved on the greater scale.
Last night was the Yule Ball- the big social event that takes place in the fourth movie when two other schools come to Hogwarts (we totally have them beat on the international bit ;)). I expected the whole event to be kind of lame (sorry guys), and had little faith, but turned out to be quite wrong. They really pulled it off. The castle was decorated with Christmas trees and fake snow and Hogwarts crests and the HPC even made wands for everyone, each one unique, which was fairly impressive. Everyone dressed up in formal attire- dresses and suits- and looked amazing. Some of the boys even acted like gentlemen and we kicked off the dancing with a waltz (yes, you read that correctly, A WALTZ. Honestly, can we have balls all the time?). Some of the boys who have a band played the music and even started with the song they use in the ball scene in the movie. It was cheesy and silly but simultaneously really fun and, dare I make such a pun, magical. :) 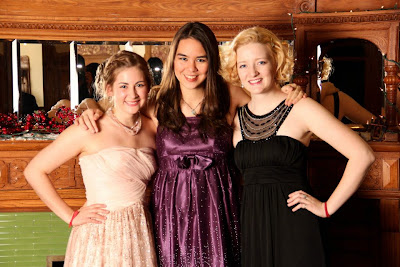