It has finally, finally happened. It's snowed. And it is beautiful, and bright, and very, very cold. And, once again, the UWC version of a not so unusual occurrence has been a completely new experience and, quite honestly, one of the best days we, or at least I, have had here.
Saturday night the majority of the student population stayed up late for "Blackout"- a party tradition where everyone wears black clothing and the entire party takes place without any (or very minimal) lighting. It was really fun (and dark) and, as a result, most people stayed in bed pretty late on Sunday morning. We did finally roll out of bed for breakfast and all of us looked forward to a full day of prepping for exams. (No, really, so, so excited to study...). But the weather had other plans.
What started with a few flakes around 1pm ended in more than half a foot of snow. And boy were the students of UWC excited. At the very start of the snowfall, about half of the campus gathered between two of the lower campus dorms to celebrate (or in the case of some of the Caribbeans, Africans, and Asians who'd never seen falling snow or any snow at all or been in such cold temperatures, to lament) and yell and dance around in the snow. This was closely followed by a game of ultimate frisbee out on the field, and then the snow festivities really kicked off.
Imagine this: you're a student at an international boarding school in the mountains with 200 other teens and you could spend you're afternoon prepping for finals, or you could celebrate the snow. But hmmm... how to do that.... oh. duh, silly me. Let's go to the hot springs! In all honesty, I was completely against the idea in the beginning, but I'm so glad I decided to go- the hot water felt incredible. Some of the braver members of our group even dared to jump into the river several times between soaks (they're crazy, I know). We spent maybe half an hour to forty minutes soaking in the water, which felt heavenly contrasted with the falling snow covering the ground all around us, and then decided to go back to the campus. In the time we'd been chilling (or rather warming), it had snowed a good inch and a half. And our clothing and shoes were sitting out. And they were almost completely covered in snow. And coooold. And we still had to walk all the way back to campus! Oops. (at this point I know that my mother is dismayed and worried that I'll get sick, so I'd just like to take a moment to reassure her that it really wasn't that bad and that we immediately warmed up and put on thick socks and we're eating our vitamins and staying healthy :))
We did finally make it back to campus, took hot showers, put warm clothing on, and enjoyed some lovely peppermint hot chocolate and watched the snow from the window (which my Bajan roommate much prefers to actually touching it). Oh but wait. That's not all.
I know I've described some pretty crazy traditions in which we engage here at UWC. Here's another one. But you'll need the back story first: When the school first opened, the dorm that I live in (Kilimanjaro, Kili for short) was a boys dorm and, after the castle was finally restored, Kosciuszko (Kozzy for short) was a girl's dorm. Fairly recently, the boys decided they should be able to live in the castle as well and the dorms switched. So every year, at the first snow, the boys run down and "reclaim" their dorm. Oh but that's not all. For whatever reason the tradition continues with the girls running out of the dorm dressed basically in swimsuits, boots, and coats, into the snow and the boys showering inside the dorm and then running out to ambush the girls. BUT, Denali (another boy's dorm and Kili's "brother" dorm) comes out and attacks the Kozzy boys and protects the Kili girls. At which point the girls run in, hide the boys' clothing, change into regular clothes, and then meet the Kozzy boys (who by now are quite frozen and desperate to get their clothing back) for a nice little reunion and speech. It's hilarious and so fun and a good dorm bonding time. And I can honestly say I'll probably never get to do that anywhere else ever again.
After my second swimsuit snow run of the day, I was just about ready to climb into bed in fuzzy socks and cuddle up and get a good night's rest for finals. Oh, but that would be too boring, don't you think? Sometime after 11pm I hear a knock on my door and, thinking it's Z or A because usually no one outside our dorm visits me that late, I just yell "yeah! come in!"
And then I was ambushed by snowballs.
In my room.
By four boys.
And there was snow all over my room, and in my bed, and on my desk.
Very funny, boys.
In actuality, it was quite funny, though quite cold and wet, and a festive end to the day of snow cheer. I even got some studying done for my finals today and I look forward to getting to play in the snow (and maybe cross country ski!) later this afternoon. Yay! :)

The view from my window last night- 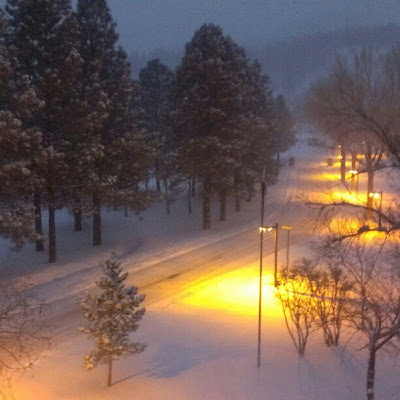 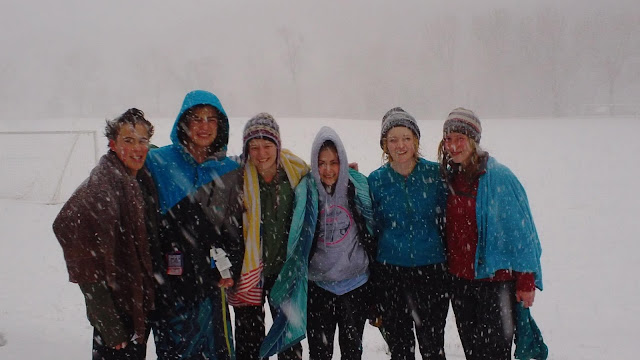 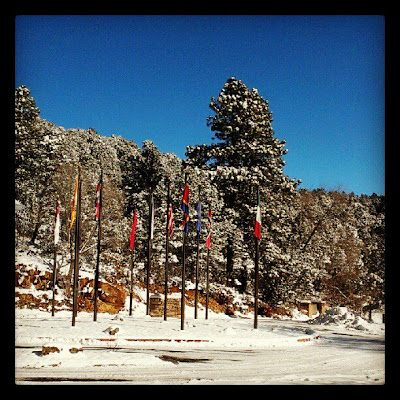